We are a small working group who met during an international training on sustainable activism in Spain at eco-dharma in November 2014. All of us are committed to working at the intersection and interdependence of activism, personal work and systemic change.

We are involved in grassroots networks and activism in Central Eastern Europe and internationally and are also part of a transnational networks of trainers around sustainable activism.

We are involved in diverse struggles as organisers, activists and allies:

Some areas we have been working inside of our trainers network are:

Some of the projects we are involved with include:

We are partnering with generative somatics in Oakland, California, USA: 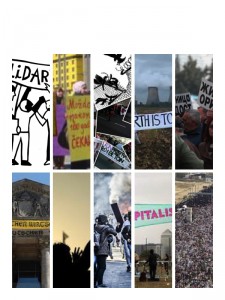 Why am I co-organising the generative somatics training in Poland?

As a radical grassroots activist I am always wondering what we need in order to strengthen our movements and to make radical social change actually happen.

generative somatics seems to promise an effective framework to bring together body and mind, emotions and thoughts – to work towards individual and collection liberation. I especially like that it is not overloaded with pseudo-spiritual/ psychological baggage – but pretty straight forward as it’s been brought forward by activists for activists.

I am excited that we are starting to bring generative somatics to Europe.

As a genderqueer activist I am convinced by the gentle but honest way the generative somatics trainers hold trauma and oppression which are present in every group.